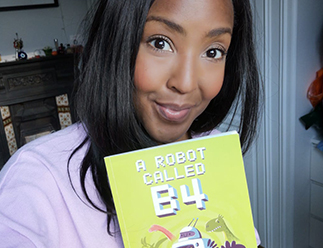 Meet our narrator of 'A Robot Called B4' audiobook - Angellica Bell

Angellica Bell has been a television and radio presenter for the last 20 years.

She was the face of Childrens' BBC between 2000-2006 and was twice nominated for Best Presenter at the Children’s Baftas. She is now known for co-presenting BBC 1’s, The One Show and the award-winning financial programme, The Martin Lewis Money Show on ITV.

Bell won the 2017 series of The BBC’s Celebrity MasterChef and in 2019 published her first cookery book aimed at children called Fantastic Eats and How to Cook Them!.

Angellica loves a challenge and during her career she toughed it out in the Arctic for five weeks in 71 Degrees North for ITV and sailed around the British Isles on a Volvo 65 as part of a fundraising effort for The One Show raising over a million pounds for Sport Relief.

“This is such a charming, adventurous story with an incredibly important message. As a mother of young children, I’m acutely aware of the importance of protecting our planet, and this book is a brilliant way to help educate our future generations about some of the big environmental issues we are facing.”