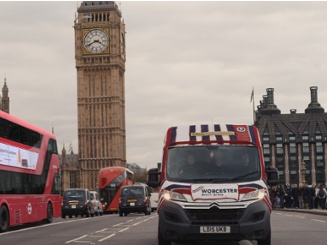 Van gets stitched up to help commuters keep woolly warm

It took 10 months, 5 knitters, 3 stitchers and 40,000 metres of red, blue and white wool to transform a plain white van into a giant woolly warmer - which even included fluffy hub caps and wing-mirror covers.

The extra-large, woolly van-jumper was designed by Bewdley artist, Betti Moretti, to help bring a little cheer as the darker and colder mornings set in.

It took the team of 8 over 1,000 hours to knit, sew and crochet using 500 balls of wool. Dressing the van ready for its road-trip took a further 5 people, 300 metres of adhesive tape and an additional 17 hours over two days.

After touring the capital dishing out hand-warmers, hot drinks, bacon sandwiches and porridge to chilly commuters, the knitted-out van started its journey to spread its warmth around the country.

We commissioned the striking, woolly ‘van-over’ as part of our ‘Rely On’ campaign, which aims to find out who the nation depends on most to warm both their homes and their hearts.

Being on the road allowed us to encourage people to get warm - inside and out - by finding out who they rely on to warm their hearts. The reactions we got from people were really heart-warming and put a smile on their faces.

Creating the oversized knit for the van was a huge amount of fun, and it was great to surprise and delight people with such an eye-catching attraction!

Watch our videos, get involved and also enter our competition to win an installed Worcester boiler (enter by 27th November 2016).

Worcester Bosch have been ranked in the top 10 most highly recommended by its consumers in the UK Domestic Applicance brands. 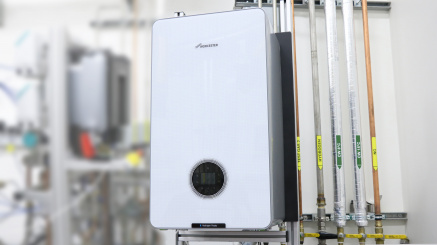 Last year, the UK committed to a target of net zero carbon emissions by 2050. A bold target that needs new technology and industry changes across a number of sectors. Steps are already being taken, for example in transport, where electric and hybrid cars are more common and accessible. 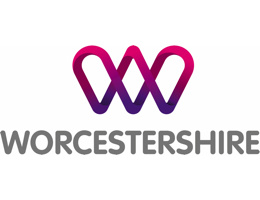 Worcester Bosch are thrilled to be part of One Worcestershire

As a company founded and proudly based in Worcester, we are thrilled to be part of One Worcestershire, sharing in the vision to continue building a connected, creative and dynamic country supporting those who choose to live, work, visit and invest in Worcestershire.